My first visual arts course during high school begun on Wednesday by starting to thinking about and making a collage about our relationship to art. We had to answer some questions and then we started to make the collages. As a hobbyist artist I am interested in the whole course, and this particular task seems the most interesting out of what I currently know about upcoming tasks. The teacher is unknown to me, but after a week I think she’s very nice.

On Wednesday I did not get much progress, but at least I got the rough sketch ready and a couple of clippings for my collage. Here’s my sketch:

And since I wrote my notes in Finnish (because it’s my mother language and the language I study in, of course), I put English translations with Gimp for those, who don’t understand my language or don’t make sense of my handwriting. Unfortunately my phone camera just doesn’t take clear pictures, but I think I managed to clear them with Gimp anyhow.

On Thursday I hoarded clippings; I had to put them to a small bag of mine and keep them with me in order to avoid losing any, as some of them were small. Then and on Friday I drew the girl and colored her hair (she really doesn’t look like me, but she isn’t even meant to). Thanks for Eerika, a friend of mine, who took a model picture of me when I did that pose. It really helped to get the face right (must be the best face I’ve drawn!). I think I did well with the hands, too. And I also glued the bird there during Friday.

On Saturday I bought some water colors (a cheap packet: just one euro). But what annoyed me about that was that all I got and in the end had was a very small and miserable brush. It took nearly two hours to paint all of that A4 paper, minus the girl and the bird. I had to use a pen for the edges of the bird and the background since I couldn’t get them painted. I’m not happy about the black color ending up on the bird. 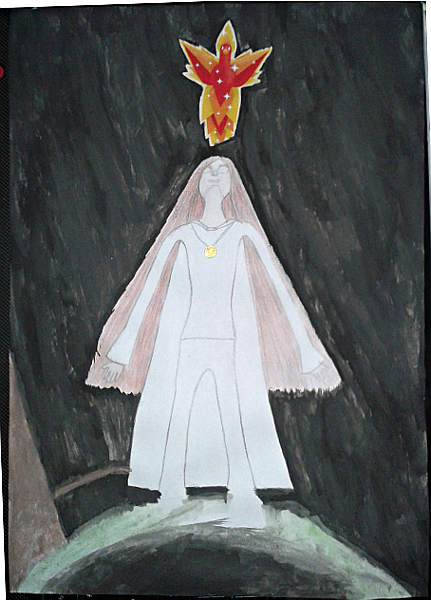 Sunday was when I glued most of the clippings to the paper. First I made the girl’s clothes out of some clippings. The cape, however, is silk paper.

Yes, something failed while cutting the clothes, so it looks a bit messed up due to all the patches I put there. And getting the hole for the golden pendant did not go that well either… Luckily the pen I used managed to cover most of the mess.

After that I started to cut and glue all sorts of things. I got the idea of cutting a small bit of a wrapping of an ice cream bar and use it for the a bit messy ends of the sleeves. I also used it for the pencil buckle of the cape. I had to use my Nintendo 3DS console to keep them still while the glue under them dried. I left some of the things for Monday to be glued at school.

At this point it was a bit dark already (it’s really getting dark fast in the evenings already!), so this picture didn’t come out very good.

Now what does this represent? Freedom and what I use for making art and getting inspiration. I also tried to put what I see as art, but it didn’t fit there. A4 paper is too small.

I do — or at least see — art daily. Art gives me a chance to flee from the reality, all the problems and bad things in it, and spend time somewhere those things can’t follow me to. It may not actually show that much, and I most likely won’t get an actual living out of art after my studying ends, but I find a very good hobby. And who knows, maybe I will earn some extra money from making art?

I aim to be an author and a translator, but since I may not get a good living out of them, I need to consider another options. IT sector it will most likely be, I’d say…

Enough about that! My laptop battery is going to run out in an hour given that the power doesn’t get back on before the battery runs out!

I'm a Finnish student studying IT at a university and a hobbyist artist fighting a war against procrastination on the losing side. I mostly write fanfictions (the currently active fandoms being Code Lyoko, Star Wars and Transformers) and some original writings such as annual Flash Fiction Month, random stories, poems and my first novel. I'm primarily a writer, but I do draw art for my stories when I can/want to/have the idea and the time for it. I'm better at writing than drawing, but I'm improving my skills at both. Currently the best way to reach me is on DeviantArt (https://www.deviantart.com/windysilver). View all posts by WindySilver