Alongside fighting with a slow internet connection as I am downloading Star Wars: The Old Republic on my laptop (it’s kriffing huge) I decided to continue the scales. I hoped that it would help my nerves.

At this point, as I was talking with my boyfriend on Whatsapp, I asked some feedback from him about the changing of the size of the scales. He noted that the change should be evened, and that I started to do. I also noticed that the “pattern” of the scales had distorted as I had proceeded, as you can see there.

First, getting rid of the distorted stuff. 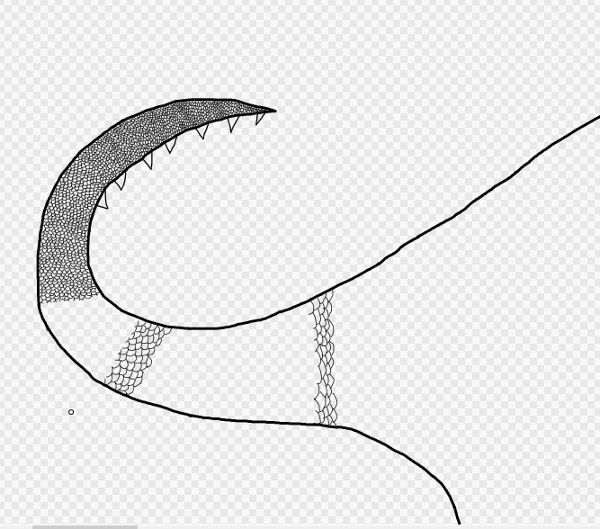 Then, getting rid of the scales which got too big too fast. I left some stuff so that I can evenly make them that big.

This is it. Now I should seam them naturally here. Seems difficult, though… Lemme think about this thing, because there is a size difference…

I am in such a good flow with what I started that I decided to erase the part I had left earlier. It’s easier to get the size change good then.

But but but but…. the pattern seemed like its starting to go off as you may be able o see in the previous picture. I erased that part.

I sure got to a good flow then but I need to fix these lines a little bit when I am done. I am sure you notice why…

I gave it a thoughts and I decided to erase the preliminary scales I had made there. I can continue easily from this. No need for additional stuff or anything that chains the things into something.

This was Sunday’s work. I’ll see when I continue this.

I'm a Finnish student studying IT at a university and a hobbyist artist fighting a war against procrastination on the losing side. I mostly write fanfictions (the currently active fandoms being Code Lyoko, Star Wars and Transformers) and some original writings such as annual Flash Fiction Month, random stories, poems and my first novel. I'm primarily a writer, but I do draw art for my stories when I can/want to/have the idea and the time for it. I'm better at writing than drawing, but I'm improving my skills at both. Currently the best way to reach me is on DeviantArt (https://www.deviantart.com/windysilver). View all posts by WindySilver