Like I had expected, I did not manage to finish my subvert last night. I will finish it today after school. For this lesson I have to do something to pass time.

I realized on this lesson that the fete the students of junior year prepare for senior year students in December near Christmas will be at the same time as my aikido training, given that the sports hall we have the training at won’t be closed at the training’s time then. I’d prefer to stay out of others’ way and go to my training (now who would’ve ever guessed that about me when it comes to physical exercise?), but I cannot decide it. I have to go to the fete to do my work (I will carry stuff before it) even if my contribution could be easily replaced. Gah!

I guessed that all I could do after writing my course diary up to date was just doing some of my writing projects on my phone since I had all my earlier works ready. I admit that I did not make very much progress on it, either, but at least I did something else than just scroll through Facebook. Wait a second, I don’t even have an account there, and even if I had, it would be a trash account for something necessary and which I’d log in to on Google Chrome once a month – or maybe a week if needed – instead of my usual browser, Mozilla Firefox.

Enough about that topic. I managed to finish my subvert. I did it to mock my local newspaper, Ilkka. 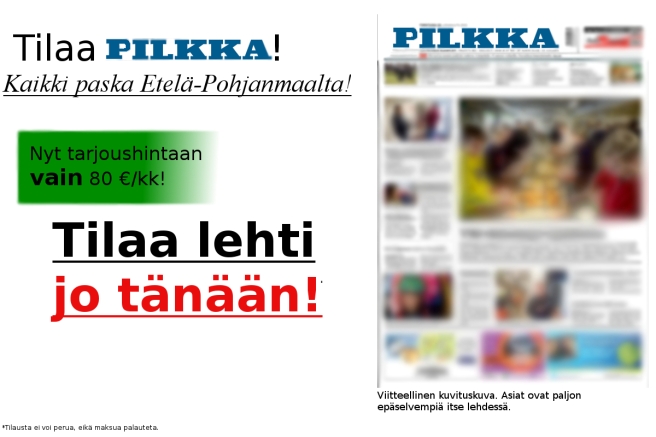 Yesterday I took the picture of the day’s paper and blurred everything else than the banner, to which I put another P to make it Pilkka. Ilkka is a male first name, while the Finnish word pilkka can be translated to the English word jeer.

The text on the left half, from top to bottom:

All the shit from South Ostrobothnia!

*The subscription cannot be withdrawn, and the payment won’t be returned.

A referential illustration. The things are much more unclear in the newspaper itself.

Now please don’t get the wrong idea about my thoughts. This is purely humor and a school work. I have absolutely nothing against Ilkka. I think it’s a very good newspaper. I do not intend to offend anyone with this thing. If anyone got offended by this, I apologize and genuinely ask to calm.

What was it like to do this? I had some issues with Gimp and my laptop is not the most cooperative one you can find, and doing something like this one is not really like me. But as it is a school work, I did it. I think it’s a bit crappy, but that’s ok for me. This one was somewhat out of my comfort zone, but at least I put some effort to this and did not just randomly make this one with the hideous “whatever” attitude. That’s what matters to me. This week (especially today and yesterday) has been quite full of fail anyways.

We’ll see what’s ahead on Monday, then. At least there is the nice weekend before that. I really want to get some progress on my personal projects now.

I have my subvert thought and planned. I found the picture I need and downloaded it on my phone. I gave some thought for what I will put and where. That is all I could do on my phone, so I decided to start to write the course diary of yesterday and today on my phone. By the way, if anyone needs a simple writing app from which you can copy the text to a computer, I suggest an app named Writer (it’s available on Google Play store, at least). Copying the text is one-way, from phone to computer, though, but otherwise it is very good and very easy to use.

I had planned to do the subvert today, but I am afraid I won’t be able to finish it, as my aikido training takes away roughly two and half hours of my time on my computer. I wonder what I can do tomorrow on arts lesson…